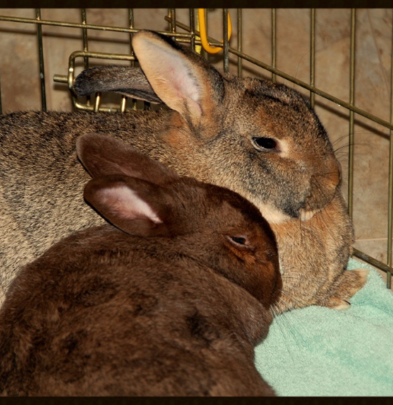 Like Palmer, Petal was adopted through T.H.E. Rabbit Resource, a particularly complicated rescue from a particularly unsafe situation, and when she arrived, she was—frankly—a hot mess. But through Palmer’s welcoming, even temperament (as well as helping hands from Mom and Aunt Karen), Petal and Palmer were bonded in record time: within three weeks, they were sharing absolutely everything, litter box included. Palmer let her think she wore the pants in the relationship, though he’d also let her know, if she stepped too far out of line, who was really boss.

It was Palmer’s spirit—mature, loving, and wise far beyond his species—that made him such a special guy. Miss Petal was a real piece of work in the early days, and he was a big part of getting her comfortable in and adapted to her new home, at a moment when she, understandably, didn’t want much to do with humans.

And Palmer was equally patient and sweet with other special beings, particularly the mentally challenged adults with whom his Aunt Karen works. He became a true ‘therapy bunny’, lighting up a room as soon as he entered, with his many friends eager to welcome him onto their laps.

"Both he and Petal—as well as Sarge (rescued from a dumpster last winter; his story was featured on the website some months ago), who has been adopted into Palmer’s former home, and certainly with his blessing—are testaments to the great work done by T.H.E. Rabbit Resource, its foster parents, and its many volunteers and friends." 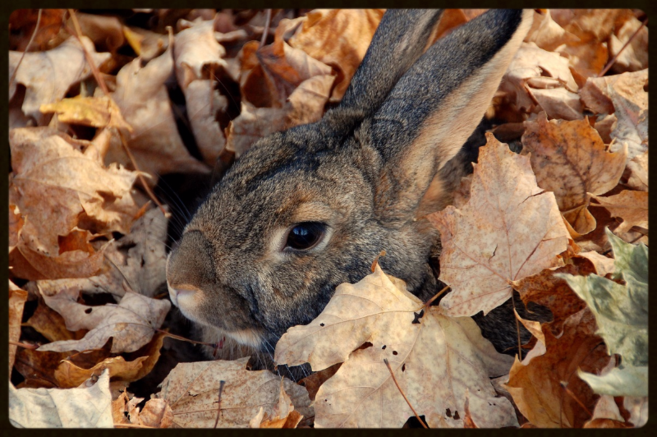 Palmer, who left this world on 4 August 2015, was golden brown, with long, upright ears, bright brown eyes, and a classic cotton tail. He was, quite simply, a wonderful bunny. An adoptee from T.H.E. Rabbit Resource, he came to live with his Mom, Cynthia, in July of 2010, and she was immediately smitten: Palmer was sweet, well-behaved, loving, curious—all the things we all love in our buns. Not long afterward, in October of the same year, he made the acquaintance of his “aunt” and pet-sitter Karen, whose house, yard and lap soon became his second home.

Palmer was an exceptionally outgoing bunny, and he never met another living being he didn’t like. Among his constellation of friends he counted innumerable humans—pretty much anyone he came into contact with—as well as many chickens (yes, chickens), cats and dogs. He was especially close to one of Karen’s dogs, Kyan, a male, and also developed an interesting relationship with Cody, one of Karen’s male canine boarders, that had us questioning his sexuality for a while—they liked to hide together under a blanket and “get busy!” No sweat, both Mom and Aunt Karen run progressive households, but we finally came to the conclusion that we’d been mistaken, because in September 2013, a fetching, chocolate-brown female bunny by the name of Petal came into Palmer’s life, and it was love at first sight (or almost...).