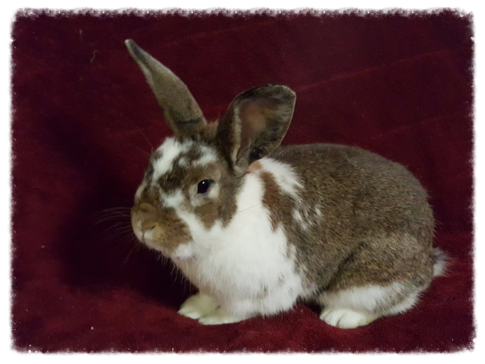 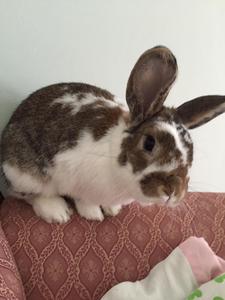 Pictures of Bowie enjoying his new home and with his new friend, Sebastienne! 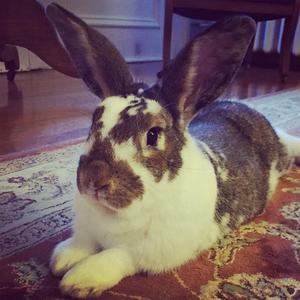 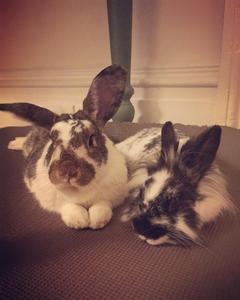 In the warm December of 2015, residents of a small city in the Southern Tier of New York noticed vividly colored domestic rabbits lounging under shrubbery in their back yards, running across busy downtown streets, and eagerly munching on broccoli and lettuce that neighbors put on their lawns. A single humane trap with some banana bait helped bring a total of six bunnies out of the elements just before the weather turned cold. Bowie is one of those lucky bunnies.

He soon visited a veterinarian, was given a clean bill of health and was neutered. After he rested for a bit, he made the long transport North to the Albany, NY area to be with his current foster mom.

Bowie was very shy when he first arrived to his foster mom, and she was concerned about his long travel, so she wrapped him in a blanket and carried him around like a baby, singing and talking to him. He absolutely loved this attention, so much so that he gets carried around almost every night now, wrapped in a blanket with his head exposed. His mom strokes his head, gets bunny nuzzles and he even eats from her hands. After some cuddle time, this seems to "warm" him up and he runs around her kitchen following her everywhere, begging for treats.

He is very shy at first, but with a soft voice and treats to bribe with, he comes out of his shell just fine and he's a very sweet bun. However, he does startle easily and his foster mom believes he would do best in a calm household, without young children and barking dogs. He is also petrified of cats-possibly from encountering them while he was living as a stray. He seems very intrigued by other buns, and other small animals (such as a guinea pig he lives with) and would possibly make a great companion for another bun!

Bowie is believed to be the father of Cutie's 4 babies. 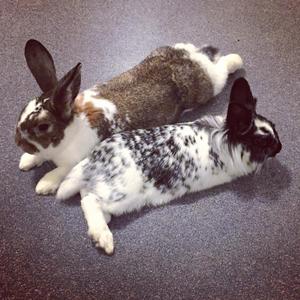